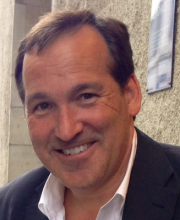 Andrew Finlayson is the Senior Vice President of Digital Media Strategies at SmithGeiger where he serves as the senior consultant regarding leading edge digital media issues spanning social media, streaming video and mobile news consumption for many top media and digital companies.

He joined SmithGeiger after completing the John S. Knight Fellowship at Stanford University where he studied emerging media technologies with a special emphasis on mobile, social, and streaming video based news concepts. During the fellowship he was a consultant to OurNews.com, the social media intranet of News Corp. He also served as a consultant to Media X, Stanford’s catalyst for industry and academic research partnerships on the impact of information and technology on society and was involved in advising start-ups.

Before the fellowship he was the Director of Online Content and Business Development for the Fox Television Stations where he focused on SEO, CMS/video streaming, and internal/external partnerships. He was promoted to this position after being the vice president and news director for Fox Chicago duopoly WFLD-WPWR where the station was a finalist for best local TV website from Editor & Publishing. Finlayson has also been a news director in Nashville for Meredith’s WSMV, where he lead the newsroom to number one ratings in four out of five newscasts, and was the news director at Cox’s San Francisco/Oakland KTVU where the station became the market leader in all dayparts and was honored by the Project for Excellence in Journalism as having the highest quality local newscast in the country.

He has reported from a half dozen countries and is the recipient of numerous Emmy and Edward R Murrow regional awards. His book, “Questions That Work” (AMACOM) has been translated into four languages and was used in national training seminars. A sought after speaker and writer, he has spoken at UC Berkeley and Stanford, appeared at numerous media conferences and has had been quoted in or had articles appear in a range of industry publications including the journalism quarterly Nieman Reports from Harvard.