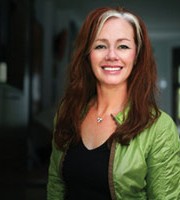 Arlene Dickinson is one of Canada’s most renowned independent marketing communications entrepreneurs.

After becoming a partner in Venture Communications in 1988, she became sole owner in 1998. She has grown the company into a strategic and creative powerhouse for a blue-chip client list, which includes Toyota (Prairies), Unilever, EnCana, Travel Alberta, Mayo Clinic, LCBO, Western Canada Lotteries, and Forzani Group Ltd.

Arlene is a fervent believer that marketing’s purpose is to deliver business results. She is well known for pioneering how marketing can be accountable to delivering on clients’ business goals.

Her accomplishments, vision and leadership have been recognized with a number of honours and awards. They include: PROFIT and Chatelaine magazine’s TOP 100 Women Business Owners; the Pinnacle Award for Entrepreneurial Excellence; Global Television Woman of Vision; and Canada’s Most Powerful Women Top 100. Venture was also recognized as one of the 50 Best Managed Companies in Canada for three consecutive years.

Arlene’s vision has driven Venture’s growth to three offices, in Toronto, Ottawa and the head office in Calgary, which occupies a 100-year-old sandstone school. Arlene enjoys travelling and relaxing with a good book. She has also been known to run the occasional half marathon, which is likely the only time she isn’t on her Blackberry.