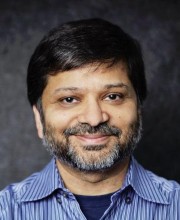 Dharmesh is the founder and CTO of HubSpot. HubSpot provides marketing software for small businesses. The company, based in Cambridge, Massachusetts, has raised $33 million in venture capital, has over 3,000 customers and 170 employees. HubSpot was voted the best company to work for in Boston in 2010.

He developed grader.com – a free suite of online tools for marketing measurement. These tools, including WebsiteGrader.com and TwitterGrader.com have won numerous awards and have been used by millions of people.

Dharmesh is the co-author of book “Inbound Marketing: Get Found Using Google, Social Media and Blogs” published by Wiley in October, 2009. The book has been consistently ranked one of the top 10 marketing books on Amazon for 9 straight months.

He also authors OnStartups.com, a top-ranking startup blog with over 25,000 subscribers and 150,000 members in its online community. He is an active member of the Boston area entrepreneurial community and a frequent speaker on the topic of startups and internet marketing.

Dharmesh has a B.S. in Computer Science from UAB and an M.S. in the Management of Technology from MIT.