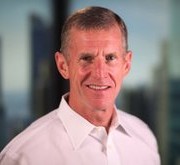 Stan McChrystal retired in July 2010 as a four-star general after over 34 years of service in the U.S. Army. His final assignment was as the commander of NATO’s International Security Assistance Force and all US forces in Afghanistan. He had previously served as the director of the Joint Staff and almost five years in command of the Joint Special Operations Command.

General McChrystal’s memoir, My Share of the Task, was a New York Times bestseller in 2013. He is a senior fellow at Yale University’s Jackson Institute for Global Affairs and a partner at McChrystal Group, where he transforms senior executives into adaptable leaders through a system he co-founded called CrossLead. He and his wife of thirty-eight years, Annie, live in Virginia.