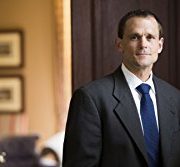 James E. Ryan is the eleventh dean of the Harvard Graduate School of Education. Before joining Harvard, he was the Matheson & Morgenthau Distinguished Professor at the University of Virginia Law School, where he founded the school’s Program in Law and Public Service. A former clerk for Chief Justice William H. Rehnquist, as well as a former rugby player, he has argued before the United States Supreme Court. He lives with his wife, Katie, in Lincoln, Massachusetts, with their four kids, two dogs, two cats, and nine chickens.