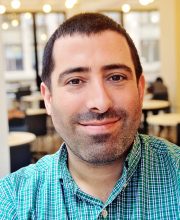 Jeremy Goldman is a social media executive, entrepreneur, and strategist. For over a decade, he has worked with companies looking to expand their business online by leveraging the power of Facebook, Twitter, LinkedIn, Pinterest, YouTube, Google+, Foursquare, and other social platforms. Both as a consultant and on staff within the beauty industry, he has been responsible for developing and implementing internet-based marketing strategies for numerous companies while simultaneously handling direct social media engagement with their customers. Often, he has also been in charge of managing the brand’s ecommerce presence, online PR, and customer service as well.

He recently began his own management consultancy and branding/communications agency, Firebrand Group, which has a unique emphasis on personal branding. The company meets its clients’ branding and direct-to-consumer communications challenges by developing winning strategies involving social media, marketing, and brand, campaign, and partnership development.

Jeremy Goldman was previously AVP of Interactive and Communications for iluminage Inc., a Unilever subsidiary, launching in 2013, marking the multinational’s first foray into luxury personal care. Before that he was Director of Digital Marketing for TEMPTU, Director of Global Ecommerce and New Media for Kiehl’s, and Senior Global Marketing Manager, Interactive, for Jurlique. He also launched and ran a successful online direct marketing agency, WJER Consulting, serving clients in fields from fashion apparel to industrial products.

Under Jeremy’s leadership, Kiehl’s won the 2009 WebAward for Outstanding Achievement in Web Development, achieved a Top 25 ranking in the L2 Digital IQ Index in the Beauty & Skincare category, and received a Top 50 Facebook IQ ranking amongst all luxury brands. While at TEMPTU, Jeremy saw a number of marketing successes. He developed a partnership between TEMPTU and Beyoncé’s Deréon fashion line that resulted in TEMPTU’s largest-ever ecommerce sales period. During his tenure, TEMPTU won the Independent Cosmetic Manufacturers and Distributors Association Award for Website Innovation.

Jeremy earned his MBA in Information Systems and Marketing at the University of Maryland’s Robert H. Smith School of Business, which ranks second only to MIT in that specific combined degree. A recognized expert in his field, his insights have been featured in publications such as Smart Money, Mashable, Read Write Web, The Star-Ledger, and Internet Retailer Magazine, and his campaigns have been detailed in Gawker and Ads of the World.

A self-described “social media overachiever,” Jeremy active on Twitter, Facebook, his blog, and more. When not working or socializing online, he likes to spend time with his wife and pets at home in New York City.