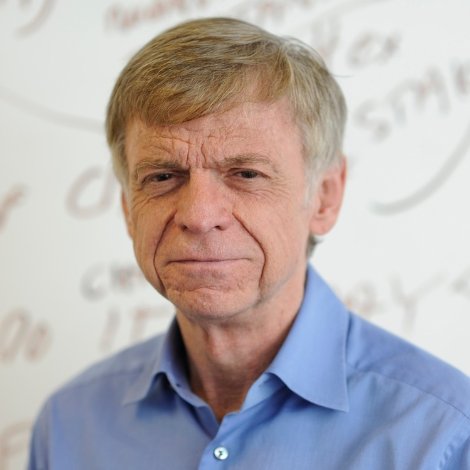 Regarded by many as the authority on leadership and change, John P. Kotter is a New York Times best-selling author, award winning business and management thought leader, business entrepreneur, inspirational speaker and Harvard Professor. His ideas, books, speeches, and company, Kotter International, have helped mobilize people around the world to better lead organizations, and their own lives, in an era of increasingly rapid change.

Professor Kotter’s MIT and Harvard education laid the foundation for his life long passion for educating, motivating and helping people. He became a member of the Harvard Business School faculty in 1972. By 1980, at the age of 33, Kotter was given tenure and a full Professorship – the youngest person ever to have received that award at the Business School. Over the past thirty years, his articles in The Harvard Business Review have sold more reprints than any of the hundreds of distinguished authors who have written for that publication during that time period. Most recently, his HBR article “Accelerate!”, won the 2012 McKinsey Award for the world’s most practical and groundbreaking thinking in the business/management arena. Today, he continues to deliver seminars in Harvard Business School’s Executive Education Programs, which are sometimes regarded as life changing by his students.

Kotter has authored 18 books to date – twelve of them bestsellers. His books have reached millions, and have been printed in over 150 foreign language editions. Arguably his most popular book, Our Iceberg is Melting, was released in 2006. This New York Times bestseller helped launch to a large audience the 8-step philosophy behind Kotter International. Written as an allegory, it is a simple, yet unforgettable story about a group of penguins on a melting iceberg and the changes they undertake to survive and thrive amidst an unclear future. This story connects with a broad range of people needed to effect major organizational transformations in an easily understood, clear way. Kotter International aims to do the same. Dr. Kotter is the founder, and Head of Research at Kotter International. Other widely read books include “A Sense of Urgency”, “The Heart of Change” and “Leading Change”, which Time magazine selected in 2011 as one of the 25 most influential business management books ever written. Professor Kotter is currently working on writing his 19th book.

To supplement his books and expand on his ideas, Kotter has released several videos on his teachings, most of which are accessible to anyone interested in his work via YouTube. His “Succeeding in a Changing World” video was awarded Best Video Training Product of the Year by Training Media Review and also won a Telly Award. His YouTube videos have been watched by hundreds of thousands and continue to be a helpful tool for anyone from students to high-level executives in the business world.

Kotter’s research and pursuits in education, business and writing over the past 35 years have earned the respect of his peers, helped transform organizations around the world, touched countless lives, and still inspires others to adopt his methods and spread the word. He continues to work tirelessly to achieve the goal of “millions leading, billions benefiting”.

Professor Kotter is a proud father of two and resides in Cambridge, MA with his wife, Nancy Dearman.