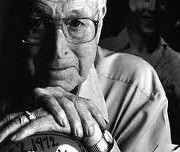 John Wooden (1910-2010), guided the UCLA Bruins to ten NCAA basketball championships over a 12-year period, including four perfect seasons and an 88-game winning streak. He was named ESPN’s “Greatest Coach of the 20th Century” and voted “#1 Coach of All Time” by The Sporting News. Sports Illustrated said it best when they said: “There’s never been a finer man in American sports than John Wooden, or a finer coach.” In 2003 John Wooden was awarded the Presidential Medal of Freedom.