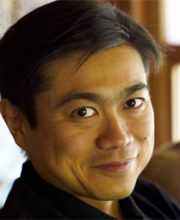 Joichi “Joi” Ito has been recognized for his work as an activist, entrepreneur, venture capitalist, and advocate of emergent democracy, privacy, and internet freedom. As director of the MIT Media Lab, and a Professor of the Practice in Media Arts and Sciences, he is currently exploring how radical new approaches to science and technology can transform society in substantial and positive ways.
Soon after coming to MIT, Ito introduced mindfulness meditation training to the Media Lab. Together with The Venerable Tenzin Priyadarshi, Ito is promoting the contribution that awareness and focus can bring to the creativity process.
Ito is Chairman of the Board of PureTech and as served as both board chair and CEO of Creative Commons. He sits on the boards of Sony Corporation, the John S. and James L. Knight Foundation, the John D. and Catherine T. MacArthur Foundation, and The New York Times Company. In Japan, he is visiting executive researcher of KEIO SFC, and he was a founder of Digital Garage, and helped establish and later became CEO of the country’s first commercial Internet service provider. Ito was an early investor in numerous companies, including Flickr, Last.fm, littleBits, Formlabs, Kickstarter, and Twitter.
Ito’s honors include TIME magazine’s “Cyber-Elite” listing in 1997 (at age 31) and selection as one of the “Global Leaders for Tomorrow” by the World Economic Forum (2001). In 2008, BusinessWeek named him one of the “25 Most Influential People on the Web.” In 2011, he received the Lifetime Achievement Award from the Oxford Internet Institute. In 2013, he received an honorary D.Litt from The New School in New York City, and in 2015 an honorary Doctor of Humane Letters degree from Tufts University. In 2014, Ito was inducted into the SXSW Interactive Hall of Fame; also In 2014, he was one of the recipients of the Golden Plate award from the Academy of Achievement. He is co-author with Jeff Howe of Whiplash: How to Survive Our Faster Future (Grand Central Publishing, December, 2016).