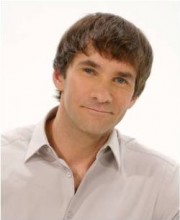 If you want to transform your life, you need the help of others – powerful relationships with people who give you support and access, and push you to exceed your potential.

Keith Ferrazzi can help: He is the world’s foremost expert in professional relationship development. He has transformed the lives and careers of clients and readers worldwide, bringing 20 years of research and experience to the art and science of business relationship development. His signature focus on success through relationships – a deeply energizing passion – has fueled his own incredible rise to prominence. Both “Forbes” and “Inc.” have called him one of the world’s most “connected” individuals.

Ferrazzi has won a place as one of the top thought leaders in American business. His first book, “Never Eat Alone,” redefined networking today. His #1 “NY Times” bestseller “Who’s Got Your Back” focuses on lifeline relationships, a narrow category of deep, trusting peer relationships that disproportionately affect our careers and well-being. Ferrazzi has been named a ‘Global Leader of Tomorrow’1″ by the World Economic Forum, one of the top ’40 Under 40’ business leaders by Crain’s Business, and one of the most creative Americans in Who’s Really Who.

Ferrazzi moves audiences to action and has been enthusiastically recognized as one the world’s most dynamic, engaging speakers. He has received accolades from an impressively diverse list of listeners: Merill Lynch, Goldman Sachs, Microsoft, the United Nations, Facebook, the World Economic Forum, Kraft, GM, Century 21, AT&T, and Aon, to name a few. Ferrazzi is a frequent contributor to CNN and CNBC, and has been a guest on “Larry King Live” and “Today Show.” His writing has appeared in “Forbes,” “Inc.,” “Business Week,” “The Wall Street Journal,” and “The Harvard Business Review.”

GRATEFUL SON
Ferrazzi grew up in Latrobe, PA, where his father was a steelworker and his mother a cleaning lady. He and his entire family worked double shifts to send him to the very best prep schools – and ultimately to Yale undergrad and Harvard Business School – imbuing in Ferrazzi a sense of gratitude that has deeply influenced his message: Generosity in relationships as the cornerstone of success.

ENTREPRENEUR AND CORPORATE WUNDERKIND
As founder and chairman of Ferrazzi Greenlight, a research-based consulting and training company, Ferrazzi provides corporate market leaders with strategic consulting and training to improve sales, performance, and team cohesion, with an emphasis on personal transformation. Ferrazzi launched his career as the youngest Chief Marketing Officer in the Fortune 500 at Deloitte Consulting, and was later the CMO at Starwood Hotels.