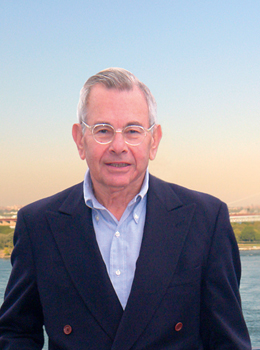 Ken Roman is a former Chairman/CEO of Ogilvy & Mather Worldwide, the highly regarded advertising and communications firm founded by David Ogilvy. He joined the agency in 1963 as an assistant account executive and served as its Chairman from 1985 to 1989.

In his 26 years with the company, he helped build the business of major clients (including American Express, Unilever, Kimberly-Clark and General Foods), expanded Ogilvy & Mather’s global network into China, Korea and Russia, and grew its creative reputation. Before O&M he worked in several corporate communications positions.

After leaving O&M in 1989, he joined American Express in a senior communications role before becoming a consultant, board director and author. He was a senior advisor to Price Waterhouse and served on a number of boards (notably Compaq Computer, Brunswick, Gartner). He has been active in public service, on the boards of Memorial Sloan-Kettering Cancer Center, the Metropolitan Opera Guild, and the New York Red Cross, and is currently a Vice Chairman of The New York Botanical Garden and a Director of The National Organization on Disability.

He co-authored two business classics – How to Advertise and Writing That Works, both in third editions, and guided the publication of The Unpublished David Ogilvy. His biography of his former boss, THE KING OF MADISON AVENUE: David Ogilvy and the Making of Modern Advertising, was published in 2009 by Palgrave Macmillan.

A graduate of Dartmouth College (Editor-in-Chief of the daily newspaper), he was born in Boston, lives in New York, is married to a native New Yorker, and vacations on Nantucket. He plays racquet sports and golf, and regards gardening as a competitive sport.