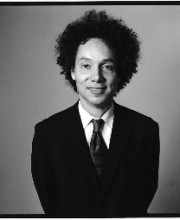 Malcolm Gladwell has been a staff writer with “The New Yorker” magazine since 1996. His 1999 profile of Ron Popeil won a National Magazine Award, and in 2005 he was named one of “Time” Magazine’s 100 Most Influential People. He is the author of four books, “The Tipping Point: How Little Things Make a Big Difference,” (2000) , “Blink: The Power of Thinking Without Thinking” (2005), and “Outliers: The Story of Success” (2008) all of which were number one “New York Times” bestsellers. His latest book, “What the Dog Saw” (2009) is a compilation of stories published in “The New Yorker.”

From 1987 to 1996, he was a reporter with the “Washington Post,” where he covered business, science, and then served as the newspaper’s New York City bureau chief. He graduated from the University of Toronto, Trinity College, with a degree in history. He was born in England, grew up in rural Ontario, and now lives in New York City.