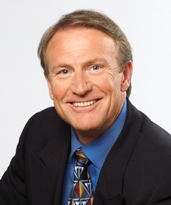 One of the most successful senior business communication executives and angel investors of our time, Mark C. Thompson has been a board member and advisor to Global 1000 companies and is Charles Schwab’s former Chief Customer Experience Officer, Chief Communications Officer and Chief of Staff. During his tenure, the company’s customer assets grew ten-fold to more than $800 billion dollars in over five million client accounts, and continue to grow during the greatest economic storms in history. Thompson created the Schwab Leadership Series and worked face-to-face with many of the world’s best global leaders and entrepreneurs – from Richard Branson and Steve Jobs to Warren Buffett, AG Lafley, Herb Kelleher, Michael Dell, Bill Gates, Ford CEO Alan Mulally and Zappos founder Tony Hsieh.

Thompson co-authored the bestseller Success Built to Last, the sequel to Jim Collins and Jerry Porras’ classic, Built to Last. By focusing on Collins’ five levels of leadership, Thompson coaches leaders to get things done fast!

Today, Thompson is an expert advisor on Level V Leadership and Built to Last – transforming how leaders inspire managers to boost sales, innovation and lead change in a volatile world. In addition, Thompson is Chairman of the American Express Leadership series for Peter Drucker’s Leader to Leader Institute. He is a member of the Board of Governors of the Institute and is a board member, investor and advisor to 8 companies while serving on the faculty of the World Economic Forum, John F. Kennedy University, and a scholar at Stanford University.