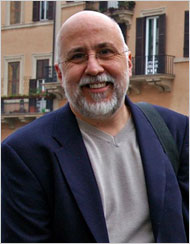 Michael D’Antonio grew up in the small island village of New Castle, New Hampshire where he discovered the world in the books at a one-room library. Before becoming a fulltime author and freelance writer, Michael worked as a reporter and features writer in New England, Washington D.C. and New York. Among other assignments he has covered the U.S. Congress, presidential campaigns and national political conventions. He has reported from Europe, Nicaragua, El Salvador, Brazil and the Philippines. During his tenure at Newsday on Long Island, he was a member of a team awarded the Pulitzer Prize and he has won several other honors, including the Alicia Patterson Fellowship.

Michael has published more than a dozen books including Atomic Harvest, Tin Cup Dreams, Mosquito, The State Boys Rebellion, and Hershey. The author of hundreds of magazine articles, his work has appeared in Esquire, The New York Times Magazine, the Los Angeles Times Magazine, Discover, and many other publications. He has also written and sold original stories for film, including two—Deacons for Defense and Crown Heights—that were produced and aired by Showtime. He received the Humanitas Award for the original story for Crown Heights.

Besides his work as a writer, Michael has been a research associate at the Center for Policy Research in Washington D.C., and a consultant for both the Dana-Farber Cancer Institute in Boston and the Pfizer Corporation. He has lectured at Columbia University Graduate School of Journalism, SUNY Empire State College, Boston University, and the University of New Hampshire.

Married to writer, professor, and psychotherapist Toni Raiten-D’Antonio Michael lives today on a much bigger island – Long Island, New York – where he and Toni raised their two daughters.