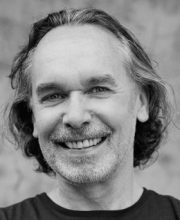 Robert is the founder of Flying Solo and hosts the Flying Solo Podcast. Alongside his role as Head Honcho, he presents at conferences & events and bangs on to the media about all things micro.

Regularly working with corporations, franchise organisations, small business groups and associations, his hot topics include how to get the attention of small business, mastering word of mouth marketing, standing out from the crowd and how to get more done in less time.

A tireless self-promoter, he’s fast-talked his way onto ABC Four Corners, Channel 9’s A Current Affair and Mornings with Kerri-Anne. In recent years he presented a weekly video blog for CBS/BNET, wrote a regular column for News Ltd. titles and has had scores of articles published online.

In 2002 he became only the second coach in Australasia to achieve the International Coach Federation credential of Professional Certified Coach.

He co-authored Flying Solo – How to go it alone in business with Sam Leader and Peter Crocker and lives in Sydney with his wife, Jane and son, Jay.