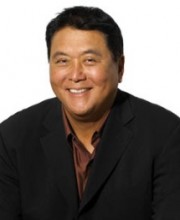 Robert Kiyosaki is best known as the author of Rich Dad Poor Dad – the #1 personal finance book of all time – which has challenged and changed the way tens of millions of people around the world think about money. Rich Dad titles hold four of the top ten spots on Nielsen Bookscan List’s Life-to-Date Sales from 2001-2008 alone. Robert has been featured on shows such as Larry King Live, Oprah, The Doctors, Bloomberg International Television and CNN.
With perspectives on money and investing that often contradict conventional wisdom, Robert has earned a reputation for straight talk, irreverence and courage. His point of view that ‘old’ advice – get a good job, save money, get out of debt, invest for the long term, and diversify – is ‘bad’ (both obsolete and flawed) advice, challenges the status quo. His assertion that “your house is not an asset” has stirred controversy but has been proven to be accurate in our economy’s current financial crisis. A documentary film based on the contradictions of ‘old financial advice’ is planned for release in 2010.
In 2006 Robert teamed up with Donald Trump to co-author Why We Want You To Be Rich – Two Men – One Message. It debuted at #1 on The New York Times bestsellers list.
Robert writes a column – “Why the Rich Are Getting Richer” – for Yahoo! Finance. He was also recently featured in TIME Magazine’s popular “10 Questions” column where Robert answers questions ranging from investing with few resources to the impact of education on one’s financial success.
Robert’s latest book, Conspiracy of the Rich: The 8 New Rules of Money, pioneered online book publishing as a free online interactive book with contributions from 1.1 million readers in over 167 countries. Frequent updates and postings appear on www.conspiracyoftherich.com.