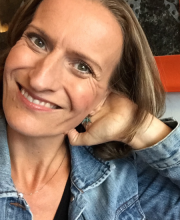 After Sam left Bristol Uni in 1996, she got a Proper Job and was very unimpressed with it. In 1998, she upped sticks and moved to Sydney. Shortly after, Sam began her career as a soloist. For the next few years she ran a copywriting and editing business, My Word, which she adored as it not only financed her Tim Tam habit, it also enabled her to work in her pyjamas.

In 2001 she met Robert Gerrish, who invited her to contribute to his Flying Solo newsletter. Next they collaborated on a book, Flying Solo – How to go it alone in business. Sam has now fulfilled her lifelong ambition of becoming a published author and has high hopes of retiring on the royalties.

Sam is a director of Flying Solo and is responsible for finance and operations. She lives in northern New South Wales with her partner John-Paul and their kids, Amy, Eleanor and Theo.