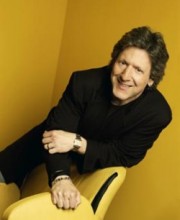 Andy Nulman is an Montreal-based businessman best known for his activities in co-founding and promoting the Just For Laughs comedy festival and eccentric attire; under Nulman’s stewardship, the festival grew from a two-day show to a month-long event drawing international audiences. Nulman also sold multi-million dollar corporate sponsorships and created/executive produced over 150 Festival TV shows, in a variety of languages, all over the world. He wrote, produced and hosted the 1997 CBC production of “The Worst of Just For Laughs,” created the controversial, Gemini-award nominated gay sketch comedy show “In Thru The Out Door” for CBC and Showtime in 1998, and won a “Best Variety Series” Gemini Award for “The Best of Just For Laughs” in 1993.

Nulman is founder, President, and CMO of Airborne Mobile, a media-space company. In 2005, he and partner Garner Bornstein sold the company to Japan’s Cybird Holdings for close to $100 million. In 2006, Airborne was cited as North America’s 4th-Fastest Growing Tech Company by the Deloitte Fast 500. In June 2008, Nulman and Bornstein re-purchased the company.

Before joining Just For Laughs, Nulman was a journalist, starting at the age of 16 at the weekly tabloid The Sunday Express, where he stayed for six years, and was eventually promoted to the positions of Entertainment Editor and Promotion Manager. During that period, he also freelanced for publications the likes of Variety, Us Magazine and the rock ‘n’ roll music bi-weekly Circus Magazine. In 2009 he rejoined Just For Laughs retaking the position of president.