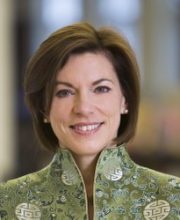 Dr. Barbara Mistick is President of Wilson College in Chambersburg, PA. She recently made history pioneering the nation’s first loan buy-back program for college students. Barbara holds prominent leadership roles in some of higher education’s most influential national organizations and is a recognized change agent. Prior to her roles in academia, Barbara was an accomplished two-time entrepreneur. She has held executive positions in a number of non-profits and public institutions such as The Carnegie Library of Pittsburgh and Mr. Rogers Neighborhood where she helped children discover their curiosity for science. Barbara is a frequent guest on NPR commenting as an expert on issues in higher education.