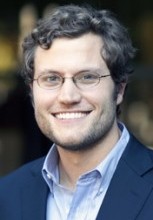 BEN CASNOCHA is an award-winning entrepreneur and author. He has written for Newsweek and public radio’s Marketplace and appeared on CNN, the CBS Early Show, and CNBC. BusinessWeek has named him one of “America’s best young entrepreneurs. He has spoken to more than ten thousand students and businesspeople in countries around the world.