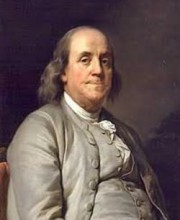 Benjamin Franklin was born in Boston on 17 January 1706 to a dyer and soap maker Josiah Franklin and Abiah Folger. Josiah was an emigrant from British town Banbury to Massachusetts and Abiah was Josiah’s second wife. Benjamin was the tenth of seventeen children of Josiah Franklin.

Josiah’s economical condition was not so strong to let him pay for Benjamin’s schooling, so all he could afford for Benjamin was to send him only for one year into school. As Josiah knew that Benjamin was fond of reading, when Benjamin was 12, his father sent him to work with his brother James (who was a printer). Benjamin helped James in composing pamphlets; setting up type and other printing related works and also sold the printed products on the streets.

Benjamin helped James for about three years and also quenched his thirst for reading from the books and other material he found there. In 1721 when Benjamin was 15, James started a newspaper “The New England Courant” in Boston. In his newspaper, James included articles, advertisements and views of people in Boston and also of his friends. As Benjamin knew that James would never allow him write for the newspaper, he found out a way to print his views and articles. Benjamin wrote letters to James by the name of a widow ‘Silence Dogood’ in which he wrote about problems and social conditions of women and about some other issues. His articles were gainingmore and more popularity every day. Everyone wanted to know about ‘Dogood’ but to no one’s avail, no one could find it out as Benjamin managed to drop the letter in James’s mail box. After few days, Benjamin confessed that he wrote all the letters; as a result James rebuked him instead of praising.

Further, James was sent to jail because of his views and stance that made fun of Boston’s Puritan preachers (the Mathers) and their belief in inoculation against Smallpox. Benjamin carried out the responsibility of printing newspaper even when James was not around for several days. When James was released from jail, instead of being thankful to Benjamin for his contribution, James started harassing him and at times he even beat Benjamin. Benjamin could not bare this all and ran away from their in 1723 when he was 17.

After running away from his brother, Benjamin tried to find a job as a printer in New York and New Jersey but couldn’t get one. A few days later, Benjamin reached Philadelphia in a boat; he looked very tired and messy. In Philadelphia, Benjamin managed to get a job as an apprentice printer and also met his future wife, Deborah Read and her family and found shelter at their home. Few months later Benjamin left for London for some time.

Benjamin, after coming back from London, borrowed money and started his own printing business and because of his hard work received many contracts to do government jobs. Further in 1728, Benjamin adopted a child (William), started a newspaper “Pennsylvania Gazette” in 1729 (which became very successful newspaper) and in 1730 married Deborah Read who was previously married to some other man (who ran away leaving her behind). Soon after that Benjamin started a bookstore and a shop along with his printing business. In 1933, Benjamin started printing “Poor Richard’s Almanac” which contained articles and news from entertainment media, politics, cooking, etc.

Benjamin became one of the most successful businessman during 1730’s and he also took active part in several social events such as building and cleaning streets, building pavements, establishing a subscription library for readers who could not afford buying every book, helped in launching few organizations that worked towards social well-being (American Philosophical Society being one example) and he also helped in building Pennsylvania Hospital in 1751, Philadelphia’s Union Fire Company and Insurance company against the loss by fire to help those who suffered economical losses because of fire, etc.

From the beginning Benjamin had deep interest in science. In the 1750s Benjamin retired from his business and started experimenting and inventing new things/machines. He invented Franklin Stole (a heat efficient stove), oval shaped swimming fins, a musical instrument called glass harmonica etc. His experiments related to electricity helped Benjamin gain popularity in science world and he was considered a successful scientist.

Along with science, one thing that attracted Benjamin’s kin mind was Politics. From 1757 to 1775, Benjamin served in England as a Colonial Representative of Pennsylvania, Georgia, New Jersey and Massachusetts. Franklin was condemned when he leaked letters of Thomas Hutchinson to the King (‘Hutchinson Affair’).

Benjamin started working towards independence and was selected in the Second Continental Congress. He was also chosen in a committee, which helped in drafting the Declaration of Independence. He was further sent to France as an ambassador to the Court of Louis XVI. He also played an important role in France-America ‘Treaty of Alliance’ in 1778 and ‘Treaty of Paris’ in 1783.

Benjamin returned to America and served as President of the Execution Council of Pennsylvania and as a delegate to the Constitutional Convention. Before his death in 1790, Benjamin wrote ‘Anti-Slavery Treatise’ in 1789. Benjamin Franklin died on 17 April 1790 when he was 84.