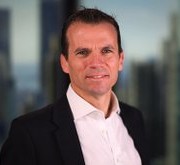 Chris Fussell is a partner at McChrystal Group, where he oversees development, client relations, and marketing for CrossLead, a leadership and management system that enables organizations to break down silos, build trust, and work as an empowered and adaptable “team of teams” toward shared goals.

Prior to joining McChrystal Group, Chris spent over 15 years as an officer in the Navy SEAL Teams. His time with SEAL Teams two, eight, and the Naval Special Warfare Development Group put him in multiple combat zones around the world.

During his career, Chris served as Aide-de-Camp to then-Lieutenant General Stan McChrystal during General McChrystal’s final year commanding the Joint Special Operations Command, then went on to earn his master’s degree in Unconventional Warfare from the Naval Postgraduate School in Monterey, CA. Chris is also a Senior Fellow at New America, a Washington D.C.-based non-partisan think tank dedicated to understanding the next generation of challenges facing the United States.

Chris and his wife Holly live on Capitol Hill in Washington, DC with their two young children.