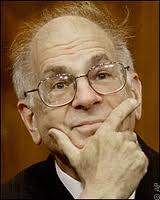 Daniel Kahneman (Hebrew: דניאל כהנמן‎) (born March 5, 1934) is an Israeli-American psychologist and winner of the Sveriges Riksbank Prize in Economic Sciences in Memory of Alfred Nobel. He is notable for his work on the psychology of judgment and decision-making, behavioral economics and hedonic psychology. With Amos Tversky and others, Kahneman established a cognitive basis for common human errors using heuristics and biases (Kahneman & Tversky, 1973; Kahneman, Slovic & Tversky, 1982; Tversky & Kahneman, 1974), and developed prospect theory (Kahneman & Tversky, 1979). He was awarded the 2002 Nobel Memorial Prize in Economics for his work in prospect theory. In 2011, he was named by Foreign Policy magazine to its list of top global thinkers. In the same year, his book Thinking, Fast and Slow, which summarizes much of his research, was published and became a best seller.