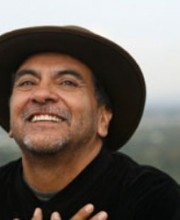 don Miguel Ruiz is the international bestselling author of “The Four Agreements” (a “New York Times” bestseller for over seven years), “The Mastery of Love,” “The Voice of Knowledge,” and “The Fifth Agreement.”

Born into a family of healers, don Miguel was raised in rural Mexico by a curandera (healer) mother and a nagual (shaman) grandfather. His family anticipated that Miguel would embrace their centuries-old legacy of healing and teaching, and carry forward the esoteric Toltec knowledge. Instead, distracted by modern life, don Miguel chose to attend medical school and become a surgeon.

A near-death experience changed his life. Late one night in the early 1970s, he awoke suddenly, having fallen asleep at the wheel of his car. At that instant, the car careened into a wall of concrete. don Miguel remembers that he was not in his physical body as he watched himself pull his two friends to safety. Stunned by this experience, he began an intensive practice of self-inquiry. He devoted himself to the mastery of the ancient ancestral wisdom, studying earnestly with his mother, and completing an apprenticeship with a powerful shaman in the Mexican desert.

In the tradition of the Toltec, a nagual guides an individual to personal freedom. Don Miguel Ruiz, a nagual from the Eagle Knight lineage, has dedicated his life to sharing the wisdom of the ancient Toltec.

For more than three decades, he has worked to impart this wisdom to his students through lectures, workshops, and journeys to sacred sites around the world.

His teachings are best known for transforming complex human issues into simple common sense — a talent that has earned him millions of fans, international acclaim, and a vote of approval from Oprah Winfrey. Sales of his Toltec Wisdom Series have soared to over seven million copies in the United States alone, and have been translated into more than thirty languages worldwide.