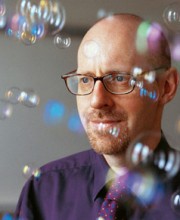 Prof Richard Wiseman is based at the University of Hertfordshire, where he holds Britain’s only Chair in the Public Understanding of Psychology. He has gained an international reputation for research into unusual areas of psychology, including luck, deception, and the science of self-help. His three books, The Luck Factor, Quirkology and 59 Seconds, have all topped the best-seller lists and have been translated into over thirty languages. He has presented keynote addresses at The Royal Society, Microsoft, Caltech, and Google. Over 2 million people have taken part in his mass participation experiments, and his YouTube channel has received over 11 million views. He is one of the most frequently quoted psychologists in the British media, and was recently listed in the Independent on Sunday’s top 100 people who make Britain a better place to live.