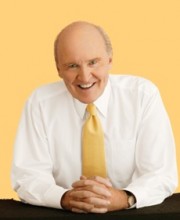 Jack Welch is the author of “Winning,” a number one “Wall Street Journal” and international bestseller. In 2001, he wrote his #1 “New York Times” and also international bestselling autobiography, “Jack: Straight from the Gut.” From 2005–2009, together with his wife Suzy Welch, he wrote a widely read weekly column, “The Welch Way.” This column appeared in BusinessWeek magazine and was published by the “New York Times” syndicate and appeared in more than 45 major newspapers around the world, reaching more than 8 million readers. He recently launched the Jack Welch Management Institute, a unique online MBA program aimed at giving students around the world and at every career level the tools to transform their lives and the organizations of the future.

Jack is the head of Jack Welch, LLC, where he serves as Special Partner with the private equity firm, Clayton, Dubilier & Rice and is a advisor to IAC (Interactive Corp). He speaks to business audiences and students around the world.

Born in Salem, Massachusetts, Jack received his undergraduate degree from the University of Massachusetts and an MS and PhD in chemical engineering from the University of Illinois. He began his career with the General Electric Company in 1960, and in 1981 became the Company’s 8th Chairman & CEO. During his 20+ year tenure as CEO, the Company’s market capitalization rose from $13 billion to $400 billion. In 2000, he was named ‘Manager of the Century’ by “Fortune” magazine.

Jack is the father of 4 children and has 10 grandchildren. He is an avid Red Sox fan, is a life-long golfer, and is a fanatic about sports and business news in every medium.