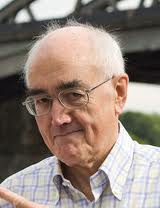 “When James Burke received an M.A. in English from Oxford University, little did he know that his career path would lead him inexorably in the direction of television – and science. After graduation, he chose what then seemed the logical route — teaching English at the Universities of Bologna and Urbino, and directing the English Schools at Bologna and Rome. He also collaborated on the production of a major Italian-English dictionary (Zanichelli) and edited sections of the Wiedenfeld & Nicholson Encyclopedia of World Art.

“But all logic flew out the window when Burke entered broadcasting, starting with his work on Italian radio and as interpreter to the B’Nai Brith representative at Vatican II. In 1965 he made the move into television, first as a reporter for the U.K.”s Granada TV in its Rome bureau. From that moment on, James Burke became fascinated with television and its potential to entertain and then inform. In fact, television has allowed Burke to become a director, producer, lecturer and best-selling author and has given him the opportunity to take his idiosyncratic view of knowledge to a world-wide audience.

“In 1966 Burke moved to London and BBC Television. Between 1966 and 1972 Burke produced, wrote and presented a number of major documentaries for BBC TV, and was co-host of a prime-time weekly science series, Tomorrow’s World. He also anchored all the BBC’s coverage of the Apollo moon flights. From 1972-1976 he produced, wrote and presented the weekly prime-time one-man science show, The Burke Special, for which he received the Royal Television Society’s silver and gold medals for excellence in television.

“Burke’s fascination with technology and its impact on society led in 1979 to the highly-acclaimed, prize-winning series, Connections, a ten-part science-history series that was filmed in over 19 countries and 150 locations. The program took a series of seemingly unrelated events, people and situations and fit them into a puzzle that helped explain the fundamental process of social and technological change. As Burke notes, “There is always a connection but, if the link has never been made before, nobody knows its there.” When first broadcast in the U.S. on PBS , Connections achieved the highest-ever audience for a documentary series in the United States. To date, the series has been broadcast in more than 50 countries and is on the curriculum of some 350 colleges and universities in the U.S. The companion book has been a be st-seller in hardback and paperback on both sides of the Atlantic.

“From Connections and the story of technology, Burke moved to an examination of the brain and the nature of human perception in a six-part series, The Real Thing, a BBC production that has been aired in some 30 countries. Throughout the 1980’s, Burke continued to produce and host several critically acclaimed and award-winning programs for the BBC and PBS including, The Day the Universe Changed, a ten-part series that aired in 1986; he anchored the coverage of the return of Halley’s comet; and produced After the Warming, a provocative two-hour mini-series on The Greenhouse Effect. In 1991, he hosted (for the National Gallery of Art, Washington, D.C. and PBS) Masters of Illusion, a program on Renaissance painting.

“From 1991 to 1994, Burke wrote and produced the 20-part television series Connections 2, the sequel to Connections, for The Learning Channel, a network of Discovery Communications, Inc. He most recently published a major work on the effect of technology on social evolution called The Axemakers Gift and will soon publish the companion book to the Connections2 series, to be titled The Pinball Effect. The CONNECTIONS CD-ROM, published by Discovery Channel Multimedia, will be available in late February 1996.

“Burke’s various books include UK best-sellers Tomorrows World I and Tomorrows World II, as well as the U.K.-U.S.A. best-sellers Connections and The Day the Universe Changed. He has contributed to Vogue, Harper’s, New Scientist and Atlantic Monthly magazines and writes a monthly column for Scientific American. He is also on the U.S. lecture circuit, keynoting for organizations such as IBM, NASA, MIT, VISA, the United Nations and the European Parliament.

“He holds two honorary doctorates for his work in communication.

“James Burke was born in Londonderry, Northern Ireland and currently resides in London.”