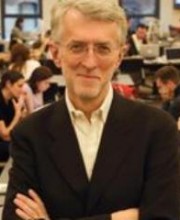 Jeff Jarvis is the proprietor of one of the Web’s most popular and respected blogs about the internet and media, Buzzmachine.com. He also writes the new media column for the Guardian in London. He was named one of 100 worldwide media leaders by the World Economic Forum at Davos in 2007 and 2008, and he was the creator and founding editor of Entertainment Weekly. He is on the faculty of the City University of New York Graduate School of Journalism in New York City.