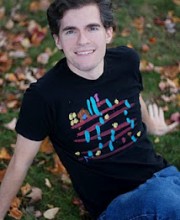 In retrospect, far too many of Jeff Ryan’s childhood memories are Nintendo related. He remembers being terrified of Chaos, the ultimate villain from Final Fantasy: he took up almost the entire screen! One Thanksgiving, he played Mega Man 2 all morning, then paused it to have a 3,500-calorine 3 pm dinner and then go to see Back to the Future II. When he got back from the movie, hours later, he unpaused the game and beat it before a 2,000-calorie midnight snack.

He joined a ’90s dotcom, Katrillion.com, a popular news and entertainment portal for teenagers. The site attracted over one million unique visitors a day and provided content for AOL, MSN and AT&T Wireless. As the video game reporter (and copy editor for the entire site—he can debate dangling participles for seven hours), he reviewed over 500 games. He toured Nintendo, interviewed its top designers, and resisted the urge to name his first daughter Zelda (which Robin Williams did do, seriously, Wikipedia it). He also reported and wrote quizzes on pop culture and technology: one quiz received over a million clicks during one weekend.

Just as Katrillion was the poster child of the dotcom boom, so, too, it was for the dotcom bust. The site closed in 2003. His story of Katrillion’s rise and fall is featured in Katy McColl’s 2005 advice book Should I Do What I Love? He has written for Salon.com, and read horror stories on All Things Considered. No, seriously.

Jeff lives in Bloomfield, NJ, walking distance from the restaurant where (spoiler alert) Tony Soprano might have died. He is married and has two daughters, who are all princesses. He can beat you at Dr. Mario.