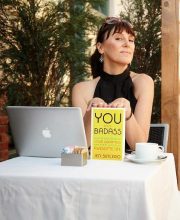 Jen Sincero is a #1 New York Times Bestselling Author, success coach and motivational cattle prod. She’s helped countless people transform their personal and professional lives via her seminars, public appearances, newsletters, products and books such as, “You Are a Badass: How to Stop Doubting Your Greatness and Start Living an Awesome Life” and the forthcoming (woot!) “You Are a Badass at Making Money: Master the Mindset of Wealth.”

She’s spoken on stages all over the world and has helped her clients build their dream businesses, become NY Times Bestselling authors, navigate million dollar business deals, find their soul mates and forgive their bitchy mothers who they now realize were doing the best they could. Jen has run her business from all corners of the globe and is really sick of writing in the third person.

I got my first real job, one that didn’t involve wearing a hairnet or bending over the hood of a wet car with a towel in my hand, in the early 90′s working for CBS Records. While there I started my first of several rock bands and eventually wrote my first book, the semi-autobiographical novel, “Don’t Sleep With Your Drummer.”

When my plans to become a world-famous rockstar didn’t pan out, I decided to try being a lesbian instead, didn’t pull that off either, and wrote my second book, the national Bestseller “The Straight Girl’s Guide To Sleeping With Chicks”.

My hope is that by speaking, coaching and writing about all the things that make me excited to be spinning around on this planet of ours, I’ll inspire you to recognize, and pursue, whatever it is that floats your banana, to tap into your own little badass, to be you times two, large and in charge, huge like The Nuge.