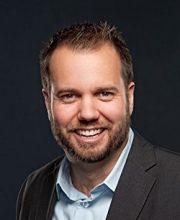 John is the CEO and co-founder of Influence & Co., a tech-enabled content marketing agency that helps brands and individuals extract and leverage their expertise to create, publish, and distribute content to gain influence, visibility, and credibility with their key audiences.

In 2016, John was a recipient of the EY Entrepreneur of the Year Award for Best Emerging Company and was recognized as one of the Business Journals’ Top 100 Visionaries. Influence & Co. was ranked No. 239 on the Inc. 500 and No. 72 on Forbes’ list of the Most Promising Companies in America in 2014. Influence & Co. was also recognized at the United Nations for being Empact’s Best Marketing and Advertising Company of 2014.

John has been called “one of the most powerful people in media who you’ve never met” by Inc. and a “must-see keynote speaker” by Forbes. He is consistently mentioned in major publications as a top influencer, leader, and speaker. John writes weekly columns for Forbes and Inc. and has contributed to more than 50 online publications, including Harvard Business Review, Entrepreneur, Fast Company, and Mashable.