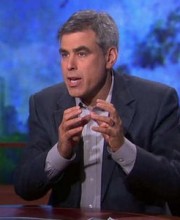 Jonathan Haidt is the Thomas Cooley Professor of Ethical Leadership at New York University’s Stern School of Business. He received his Ph.D. in social psychology from the University of Pennsylvania in 1992 and then did post-doctoral research at the University of Chicago and in Orissa, India. He taught at the University of Virginia for 16 years, where he conducted the research reported in The Righteous Mind.

His research focuses on morality – its emotional foundations, cultural variations, and developmental course. He began his career studying the negative moral emotions, such as disgust, shame, and vengeance, but then moved on to the understudied positive moral emotions, such as admiration, awe, and moral elevation. He is the co-developer of Moral Foundations theory, and of the research site YourMorals.org. He uses his research to help people understand and respect the moral motives of their enemies (see CivilPolitics.org, and see his 2008 TED talk). He was the 2004 winner of the Virginia “Outstanding Faculty Award.” He is the author of The Happiness Hypothesis: Finding Modern Truth in Ancient Wisdom, and of The Righteous Mind: Why Good People are Divided by Politics and Religion.