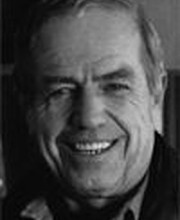 Larry Alfred Woiwode (born October 30, 1941) is an American writer who lives in North Dakota, where he has been the state’s Poet Laureate since 1995. His work has appeared in The New Yorker, Esquire, The Atlantic Monthly, Harpers, Gentleman’s Quarterly, The Partisan Review and The Paris Review. He is the author of five novels; two collections of short stories, a commentary titled “Acts,” a biography of the Gold Seal founder and entrepreneur, Harold Schafer, Aristocrat of the West, a book of poetry, Even Tide ; and reviews and essays and essay-reviews that have appeared in dozens of publications, including The New York Times and The Washington Post Book World.

He has served as Writer in Residence at the University of Wisconsin, Madison, and conducted summer sessions as a professor at Wheaton College, Chicago, and the C.S. Lewis Seminars at Cambridge; he has also conducted seminars and workshops in fourteen states of the U.S., all of the Canadian provinces but British Columbia, and in England, Lithuania, and the Scandinavias. He has published a dozen book sin a variety of genres, and his work has been translated into a dozen languages.