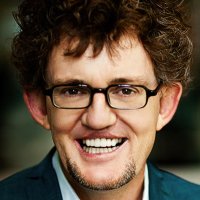 “An autobiography is only to be trusted when it reveals something disgraceful. A man who gives a good account of himself is probably lying, since any life when viewed from the inside is simply a series of defeats.” George Orwell

Michael was banned from his high school reunion for “the balloon incident”, was sued by one of his Law School lecturers for defamation, gave himself a concussion digging a hole as a laborer, was fired on his first shift as a garage attendant and has held a number of jobs where he had little or no impact.

Luckily, there’s also been some upside. He is the author of a number of successful books including the best sellers ‘End Malaria’ (which raise hundreds of thousands of dollars for Malaria No More) and ‘Do More Great Work: stop the busywork and start the work that matters’. He is also the founder and Senior Partner of Box of Crayons (BoxOfCrayons.biz), and was the first Canadian Coach of the Year and a Rhodes Scholar.

Before Box of Crayons, he was the first employee for what is now the world’s largest independent innovation agency, and while most of what he invented never saw the light of day, he did have a hand in Pizza Hut’s stuffed crust pizza. He has also spent time as a change management consultant where he batted about average for the industry for really successful change projects – 10% or so. His only lasting impact in this role was writing the global vision for GlaxoSmithKline, something that has lasted more than a decade even though it took almost no time at all to create.

Box of Crayons is a company that helps organizations around the world do less Good Work and more Great Work. They have particular expertise with organizations in the financial, professional service, pharmaceutical and consumer goods market sectors, and particular success with organizations with engaged but overwhelmed employees. Box of Crayons’ premier product is the Coaching for Great Work program which gives time-stretched managers and leaders practical coaching skills that stick. It is delivered by a global cadre of program leaders.

Michael created The Eight Irresistible Principles of Fun (EightPrinciples.com), a short internet movie seen by millions, and some other movies seen by a lot fewer people (The 5¾ Questions You’ve Been Avoiding, Great Work Alchemy and 11 Words for 2011).

Michael speaks regularly to audiences around the world. Highlights include speaking at Google, the HRPA and SHRM conferences, the Rural Women of Manitoba conference and anywhere that’s vaguely warm during wintertime in Toronto, his home.

“If I had to pick a person to have dinner with, when I need to be prodded and challenged and inspired to think about the things I really am committed to think about for myself and what I’m doing, I’d pick Michael Bungay Stanier. He has an ability to shake our tree and make us more conscious and responsible about what we know but aren’t willing to admit we know yet.”
David Allen, author of Getting Things Done