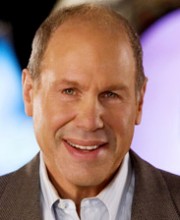 For four decades, Michael Eisner has been a leader in the American entertainment industry. He began his career at ABC, where he helped take the network from number three to number one in primetime, daytime and children’s television with such landmark shows as Happy Days; Barney Miller; Rich Man, Poor Man; and Roots. In 1976, he became president of Paramount Pictures, turning out hit films such as Raiders of the Lost Ark, Saturday Night Fever, Grease, and Terms of Endearment. This string of critically acclaimed and blockbuster films led the studio to become number one in box office and profitability in both theatrical movies and network television production.
In 1984 Michael assumed the position of Chairman and Chief Executive Officer of The Walt Disney Company and, in the ensuing 21 years, transformed it from a film and theme park company with $1.8 billion in enterprise value into a global media empire valued at $80 billion. For almost thirty years, companies that Eisner managed were either number one or number two at the motion picture box office.
In 2005, Michael began the “next act” of his career by founding The Tornante Company, a privately held company that invests in, acquires, incubates, and operates media and entertainment companies.

In October 2007, Tornante and Madison Dearborn Partners acquired The Topps Company, a leading creator and marketer of sports cards, distinctive confectionery, and other entertaining products for well over 50 years. Under Michael’s vision and leadership as Chairman, through filmed entertainment, Internet and television, the iconic Topps brand is being transformed into a full-fledged sports media brand. Topps’ confection division, Bazooka Candy Brands, is also being retooled to become the world’s most innovative kids confection company.
Through Tornante, Michael also created Vuguru, an independent studio that develops and finances world-class content for digital and international platforms. Vuguru’s first production, Prom Queen, quickly became an Internet sensation. In 2009, Michael secured a partnership with and investment from Rogers Media of Canada that enabled Vuguru to be spun off from Tornante. Vuguru is expanding rapidly with the company significantly increasing the number of annual productions. Michael now serves as the Chairman of the company’s Board of Directors, with Tornante as Vuguru’s majority owner.
In July 2008, Viacom’s Nick at Nite licensed the US distribution rights to Glenn Martin, DDS, Tornante’s first television series which Michael developed via a newly formed division – Tornante Animation. The stop-motion comedy series, which debuted in August 2009, was renewed for a second season of 20 episodes and is also being licensed by CityTV (Canada), Sky (UK), Foxtel (Australia), LAPTV (Latin America), Sky Uno (Italy), and numerous other distributors around the world.
Michael is the author of Work in Progress, about his involvement in the entertainment industry, as well as Camp, about the life lessons learned during his formative years at Keewaydin summer camp in Vermont. Michael’s third book, Working Together: Why Great Partnerships Succeed, profiles several successful partnerships in the business world and beyond, including Warren Buffett and Charlie Munger, Bill and Melinda Gates, Ron Howard and Brian Grazer, Valentino and Giancarlo Giammetti, Joe Torre and Don Zimmer, and others. The book was published by Harper Studio in September 2010.

Born March 7, 1942, in New York, Michael graduated from Lawrenceville School in 1960 and Denison University in 1964 with a B.A. in English literature and theater. He serves on the boards of the California Institute of the Arts, Denison University, American Hospital of Paris Foundation, the Aspen Institute, the Yale School of Architecture Dean’s Council, the Michael D. Eisner School of Education, the Eisner Pediatric and Family Medical Center, and The Eisner Foundation, a philanthropic organization that he founded and funded, headed by his wife Jane.
He and Jane have three sons (Breck, Eric, and Anders) three daughters-in-law (Georgia, Stacey, and Terena), and three grandchildren (Noah, Eloise, and Grace).