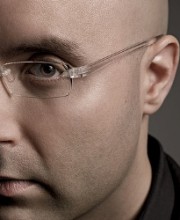 When Google wanted to explain online marketing to the top brands in the world, they brought Mitch Joel to the Googleplex in Mountain View, California. Marketing Magazine dubbed him the “Rock Star of Digital Marketing” and called him, “one of North America’s leading digital visionaries.” In 2006 he was named one of the most influential authorities on Blog Marketing in the world. Mitch Joel is President of Twist Image – an award-winning Digital Marketing and Communications agency (although he prefers the title, Media Hacker). He has been called a marketing and communications visionary, interactive expert and community leader. He is also a Blogger, Podcaster, passionate entrepreneur and speaker who connects with people worldwide by sharing his marketing insights on digital marketing and personal branding. In 2008, Mitch was named Canada’s Most Influential Male in Social Media, one of the top 100 online marketers in the world, and was awarded the highly prestigious Canada’s Top 40 Under 40 (recognizing individuals who have achieved a significant amount of success but have not yet reached the age of 40). In 2010, Marketing Magazine named Twist Image one of the Top 10 agencies in Canada (and the only digital marketing pure-play to make the list).
Joel is the Vice-Chair and Board Member of the Canadian Marketing Association and an executive for the National Advertising Benevolent Society of Quebec. He is also a former Board Member of the Interactive Advertising Bureau of Canada. He sits on the content committee for both Shop.org and the Web Analytics Association, and is on the advisory council for many businesses and charitable organizations.
Joel speaks frequently to diverse groups like Wal-Mart, Starbucks, Microsoft, Procter and Gamble, Hewlett Packard, Unilever and has shared the stage with former President of the United States, Bill Clinton, Sir Richard Branson, Anthony Robbins, Tom Peters and Dr. Phil. As a professional speaker, Mitch is represented exclusively by Greater Talent Network in the U.S. and by Speaker’s Spotlight in Canada.
He co-launched Distort Entertainment, the only hard music label in Canada to have major label distribution (Universal Music) and whose roster features the platinum-plus, Juno Award and MuchMusic Video Award-winning acts, Alexisonfire and City And Colour.
Joel is frequently called upon to be a subject matter expert for Huffington Post, BusinessWeek, Fast Company, Marketing Magazine, Profit, Strategy, Money, The Globe & Mail and many other media outlets. His newspaper business column, New Business – Six Pixels of Separation, runs bi-monthly in both The Montreal Gazette and Vancouver Sun. His first book, Six Pixels of Separation (published by Grand Central Publishing – Hachette Book Group), named after his successful Blog and Podcast is a business and marketing best-seller.