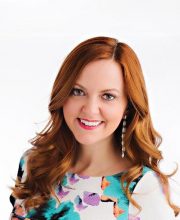 Natalie MacNeil is an Emmy Award–winning media producer; the author of (self-published) She Takes On the World: A Guide to Being Your Own Boss, Working Happy, and Living on Purpose; and the creator of SheTakesOnTheWorld.com.

MacNeil is frequently quoted and interviewed in the media. She has appeared on top media outlets including CNN and in Glamour, People StyleWatch, Inc., Forbes, Forbes Woman, The Wall Street Journal, Entrepreneur.com, The Globe and Mail, Mashable, and more.