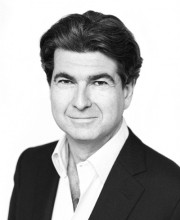 Octavius Black is the CEO of Mind Gym (www.themindgym.com), which he co-founded in 2001.

Mind Gym has helped 53% of S&P100, from Microsoft to MetLife, and 61% of FTSE 100, from Unilever to GSK, transform performance by changing the way employees think. In 2014, over 250,000 managers in over 40 countries will take part in a Mind Gym ‘workout’ or other live experience. Mind Gym has won numerous awards including for the turnaround of customer service at Santander and employee engagement at British Gas, as well as Learning Company of the year 2013, 2014.

Octavius is regarded as a business authority and has edited Mind Gym research papers on a wide range of topics including: how to upgrade when you downsize; and how to increase performance without spending a penny. He has written numerous articles for broadsheet newspapers, including the Financial Times, The Times, and writes a monthly column in the business section of The Sunday Telegraph. He has also made several appearances on the BBC. See a full summary of press coverage on our website (www.themindgym.com/category/press/).

Octavius leads Mind Gym’s CSR programme, ‘Parent Gym’ (www.parentgym.com), which provides free parenting courses to parents and children in deprived parts of UK and won a highly coveted ‘tick’ from Business in the Community. Mayor of London, Boris Johnson visited the launch of Parent Gym and commented in his column in The Telegraph that it was ‘just about the most hopeful thing [he has] seen in the past few months’.

Previously, Octavius led the sales & marketing side of employee communication consultancy Smythe Dorward Lambert as it grew from 9 to 100 people, before the consultancy was sold to Omnicom in 1996. He worked as a business analyst at Booz Allen and Hamilton and was a journalist on both sides of the Atlantic.

Octavius was educated at Eton and has an MA in Philosophy, Politics and Economics from Oxford University. He lives in London with his wife and daughter.