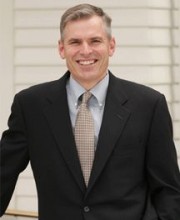 Patrick Lencioni is founder and president of The Table Group, Inc., a specialized management-consulting firm focused on organizational health. He has been described by The One-Minute Manager’s Ken Blanchard as “fast defining the next generation of leadership thinkers.”
Pat’s passion for organizations and teams is reflected in his writing, speaking, and consulting. Lencioni is the author of nine best-selling books with nearly 3 million copies sold. After several years in print, his book The Five Dysfunctions of a Team continues to be a fixture on national best-seller lists. The Three Signs of a Miserable Job, became an instant best-seller in the Wall Street Journal, New York Times andBusinessWeek. And his latest work, Getting Naked, was released in February 2010.
The Wall Street Journal has named Lencioni one of the most in-demand business speakers. And he has been a keynote speaker on the same ticket with George Bush Sr., Jack Welch, Rudy Guiliani, and General Colin Powell.
Pat’s work has been featured in numerous publications such asBusinessWeek, Fast Company, INC Magazine, USA Today, Fortune, Drucker Foundation’ Leader to Leader, and Harvard Business Review.
As a consultant and speaker, he has worked with thousands of senior executives in organizations ranging from Fortune 500 corporations and professional sports teams to universities and nonprofits, including Southwest Airlines, Barnes & Noble, General Mills, Newell Rubbermaid, SAP, Washington Mutual, and the US Military Academy at West Point.
Prior to founding The Table Group, Pat worked at Bain & Company, Oracle Corporation, and Sybase, where he was vice president of organizational development. He also served on the National Board of Directors for the Make-A-Wish Foundation of America from 2000-2003.
Pat lives in the Bay Area with his wife Laura and four boys.