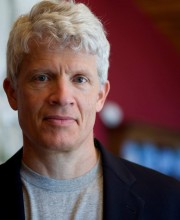 A journalist since 1983, Paul Roberts writes and lectures frequently on the complex interplay of business, technology, psychology, and the natural world. His most recent book, “The Impulse Society: America in the Age of Instant Gratification,” examines the accelerating and increasingly intimate — and troubling — relationship between the marketplace and the Self. Check out the book’s official website at http://theimpulsesociety.wordpress.com/

The Impulse Society follows on the success of two earlier books – The End of Food (2008), about the global food economy; and The End of Oil (2004), which explored the challenges of our fossil-fuel economy. Roberts work has written for The Los Angeles Times, The Washington Post, and The (UK) Guardian and has appeared in Slate, USA Today, The New Republic, Newsweek, The Christian Science Monitor, Rolling Stone, and Outside magazine.

Roberts has delivered lectures and keynotes to a variety of organizations, including the World Economic Forum (Davos), the U.S. Environmental Protection Agency, the Biotechnology Industry Organization, the Council on Foreign Relations, and the World Affairs Council. He lives in Washington State.