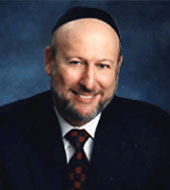 Rabbi Daniel Lapin, known world-wide as America’s Rabbi, is a noted rabbinic scholar, best-selling author and host of the Rabbi Daniel Lapin Show on San Francisco’s KSFO. He is one of America’s most eloquent speakers and his ability to extract life principles from the Bible and transmit them in an entertaining manner has brought countless numbers of Jews and Christians closer to their respective faiths. In 2007 Newsweek magazine included him in its list of America’s fifty most influential rabbis.

Before immigrating to the United States in 1973, Rabbi Daniel Lapin studied Torah, physics, economics and mathematics in Johannesburg, London and Jerusalem. This seemingly unlikely combination forms the bedrock of his conviction that no conflict exists between the physical and spiritual, virtue and strength, or faith and wealth. He quickly became persuaded that God continues to smile on the United States of America and he became a naturalized citizen on what he describes as the proudest day of his life.

Rabbi Daniel Lapin was the founding rabbi of Pacific Jewish Center, a now legendary Orthodox synagogue in Venice, California. He implanted the community’s mission of demonstrating the relevance of traditional Faith to modern life.