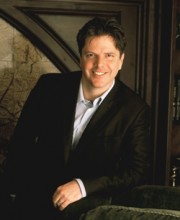 When Richard Paul Evans wrote the #1 best-seller, The Christmas Box, he never intended on becoming an international bestselling author.

Officially, he was an advertising executive, an award-winning clay animator for the American and Japanese markets, candidate for state legislature and most importantly, husband and father. The Christmas Box was written as an expression of love for his (then) two daughters. In 1993, Evans reproduced 20 copies of the final story and gave them to his closest relatives and friends as Christmas presents. In the month following, those 20 copies were passed around more than a hundred times, and soon word spread so widely that bookstores began calling his home with orders for the book.

His quiet story of parental love and the true meaning of Christmas made history when it became simultaneously the #1 hardcover and paperback book in the nation. Since then, more than eight million copies of The Christmas Box have been printed. The Emmy award-winning CBS television movie based on The Christmas Box starred Maureen O’Hara and Richard Thomas. Three more of Evans’s books were produced into television premiers and starred such well-known actors as Rob Lowe, Christopher Lloyd, James Earl Jones, Vanessa Redgrave, Naomi Watts, Mary McDonough and Academy award winner Ellen Burstyn. He has since written 16 consecutive New York Times bestsellers and is one of the few authors in history to have hit both the fiction and non-fiction bestseller lists. He has won three awards for his books including Romantic Times best women’s novel (The Sunflower), the 1998 American Mothers book award and two first place Storytelling World awards.

During the Spring of 1997, Evans founded The Christmas Box House International, an organization devoted to building shelters and providing services for abused and neglected children. Such shelters are operational in Moab, Vernal, Ogden and Salt Lake City, Utah and Lucre, Peru. To date, more than 30,000 children have been housed in Christmas Box House facilities.