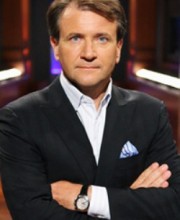 Robert Herjavec began his career with IBM mainframe sales but founded his own business in 1990 − BRAK Systems Inc. − one of North America´s first and foremost security integrators. BRAK was responsible for bringing technologies such as Checkpoint and ISS to Canada; it quickly grew into the largest security integrator in Canada and ranked on the Profit 100 as one of the country´s fastest growing companies.

BRAK was eventually sold to AT&T where Mr. Herjavec stayed for a period of time as VP of Internet based security. Mr. Herjavec was then brought on as Worldwide VP of Sales for publicly held (NASDAQ) RAMP Networks − one of the early developers of VPN technology. RAMP was acquired by Nokia in an all cash $225 million transaction.

After a three year hiatus, Mr. Herjavec went on to found The Herjavec Group (THG) which has in five short years become the country´s largest security integrator − ranked by Branham as one of the country´s top security companies, and Profit as one of the country´s fastest growing companies (two years in row). THG continues to expand with offices in Montreal, Quebec City, Ottawa, Toronto and Calgary. The company has recently expanded into the U.S. with an acquisition in New York.