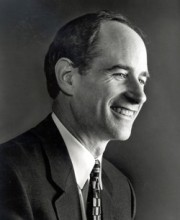 Roger Martin has served as dean of the Rotman School of Management since September 1, 1998. Previously, he spent 13 years as a Director of Monitor Company, a global strategy consulting firm based in Cambridge, Massachusetts, where he served as co-head of the firm for two years.

His research work is in Integrative Thinking, Business Design, Corporate Social Responsibility and Country Competitiveness. He writes extensively on design and was a regular columnist for the BusinessWeek.com Innovation and Design Channel. He is also a regular contributor to: Washington Post’s On Leadership blog: the Financial Times’ Judgment Call column: and Harvard Business Review’s The Conversation blog. He has written nine Harvard Business Review articles and published three books: The Design of Business (Harvard Business School Press, 2009), The Opposable Mind (Harvard Business School Press, 2007) and The Responsibility Virus (Basic Books, 2002). He also co-wrote (with Mihnea Moldoveanu) The Future of the MBA (Oxford University Press, 2008) and Diaminds (University of Toronto Press, 2009).

He serves on the Boards of Thomson Reuters Corporation, Research in Motion, The Skoll Foundation, and the Canadian Credit Management Foundation. He serves as Chair of Tennis Canada and the Ontario Task Force on Competitiveness, Productivity and Economic Progress.

A Canadian from Wallenstein, Ontario, Roger received his AB from Harvard College, with a concentration in Economics, in 1979 and his MBA from the Harvard Business School in 1981.