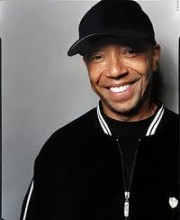 Russell Simmons has been the leader in bringing the powerful influence of hip-hop culture to every facet of business, media and fashion since its inception in the late 1970s through current day in which its integration into mainstream American Culture has created an entirely new, post-racial, progressive new America.

Simmons’ businesses have always been rooted in giving a powerful voice to emergent new creative and social movements, and integrating them into the American psyche. His business successes have spanned music, film, television, fashion, video games, online and financial services; his activism has encompassed all of the areas touched by his businesses, including poverty, education, social justice and inclusion.

Following his departure from Def Jam, in 1999, Russell created a fashion empire in Phat Farm, which begat Baby Phat and Run Athletics, and put the definitive stake in the ground for urban streetwear and helped open the door for a generation of new designers including: Roc-A-Wear, Sean John, Derion, Enyce, Ecko and many others.

In 2003 Simmons co-founded Unirush Financial Services with consumer debt investor David Rosenberg. Initially built to provide access to the 60 million Americans rejected by or under-served by the consumer banking industry, it was one of the pioneers of the now rapidly growing “general purpose reloadable” (GPR) debit card business – a $300 billion industry. In September of 2010, Accel Partners, a leading venture fund, and The Carlyle Group, a leading private equity firm, invested in the venture to enable the Rushcard empowerment service to tap into the growing need in the middle class for an alternative to conventional banking.

In 2006, Simmons broke new ground in becoming the first African American to launch a major jewelry company, Simmons Jewelry Co. (SJC). SJC is now a leading supplier of branded men’s jewelery to leading retail chains Sterling and Zales, while funding educational programs in Africa, the major source of diamonds, through the industry-supported work of his ground-breaking charity, The Diamond Empowerment Foundation.

In 2008, Simmons founded GlobalGrind.com, the leading online destination for celebrity entertainment, music, culture and politics for the new, post-racial America. Accel Partners (Facebook, Groupon, Comscore, Brightcove, Glam), through its managing partner, Jim Breyer, were initial investors and have supported the venture through its growth to a growing community reaching 2.6 million monthly unique visitors. In its first year of sales operations, Global Grind generated $1.2 million in sales and has surpassed all hip-hop sites to be in a category of its own.

Also in 2008, Simmons launched Argyleculture, the first fashion brand that speaks directly to the “Urban Graduate” – the multi-racial, culturally sophisticated consumer who once shopped urban but is now faced with a cultural conformity not seen since the 1950’s. The essence of Argyleculture is neo-traditional and speaks directly to that increasingly large and diverse demographic that includes Hollywood celebrities and an aspiring new middle class. The brand was launched in partnership with Macy’s and includes the iconic argyle pattern across 9 categorical licensees, such as Sportswear, Clothing, Headwear, Hosiery, Acessories, Jewelry and Optical. It is a lifestyle brand that goes well beyond Men’s apparel to Women’s fashions and Home Furnishings.

Simmons’ activism has grown out of his many years of traveling and advocating nationally and internationally on behalf of his brands. Social justice, education inclusion and financial empowerment come directly from his work in music, fashion, entertainment and financial services.

In 1995 he, along with his brothers Danny and Joseph Simmons (Rev. Run of Run DMC), founded Rush Philanthropic Arts Foundation. The organization is dedicated to providing disadvantaged urban youth with significant exposure and access to the arts, as well as offering exhibition opportunities to underrepresented artists and artists of color.

Following the historic Hip-Hop Summit organized in June of 2001, Simmons co-founded the Hip-Hop Summit Action Network (HSAN) with civil rights activist Dr. Benjamin Chavis, a former head of the NAACP. HSAN’s mission is to harness the cultural relevance of hip-hop music as a catalyst for education advocacy and other societal concerns fundamental to the well being of at-risk youth throughout the United States. Among HSAN’s major initiatives were helping to spearhead the first changes in 30 years to the repressive Rockefeller Drug Laws, which were repealed through Simmons’ activism in 2008, and a successful First Amendment challenge to the NY State lobbying regulations that sought to prevent raising public awareness about state legislative issues.

Simmons has also been active in racial and religious reconciliation through the Foundation for Ethnic Understanding, a foundation co-chaired by Rabbi Marc Schneier, also head of the World Jewish Congress. The organization has brought interfaith communications between religious and ethnic leaders including a remarkable twinning program between mosques and synagogues around the world.

Russell Simmons has extended his social activism to include the plight of animals and the state of the environment. Simmons, a vegan, joined forces with People for the Ethical Treatment of Animals (PETA) in their successful negotiations with Kentucky Fried Chicken (KFC) to require its poultry suppliers to improve their practices for raising and slaughtering chickens. In addition, Simmons, joined The American Society for the Prevention of Cruelty to Animals (ASPCA) to launch a national campaign to help raise awareness of animal abuse and neglect. Simmons appeared in the group’s anti-dog fighting PSA and national advertising campaign.

Simmons, a long time supporter of equal rights for all, spoke at Los Angeles’ 2010 Gay Pride Rally where he pledged to stay the course with his friends in the LGBT community until marriage equality was a right enjoyed by all, pledging to help the cause state by state. This year he received the Gay and Lesbian Alliance Against Defamation (GLAAD) Media Award.

In 2007, Simmons released the wildly successful book entitled “Do You! 12 Laws to Access the Power in You to Achieve Happiness and Success,” which combined effective business practices with a spiritual foundation to be the best you can be. The book was a New York Times Best Seller, and was featured on The Oprah Winfrey Show. This was followed up in 2011 with a second New York Times best seller, “Super Rich: Inside and Out” about the power of inward strength and reflection as a means of achieving human aspiration.

Russell is a native New Yorker who attended City College of New York.