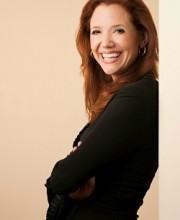 Growing up with the last name Hogshead would give anyone an unconventional point of view. Today, after surviving years of harassment on the playground, Sally is a speaker, author, and brand innovation consultant, helping companies develop messages that persuade and captivate. Clients past and present include Nike, MINI Cooper, Aflac, Cole Haan, Target, Coca-Cola and Godiva.

Sally’s work and insights have been profiled by The New York Times, NBC, ABC, CBS and MSNBC. She’s been described by the press as “intrepid” and an “advertising mastermind.” Reality TV show Making It Big named her “Advertising’s Icon” who has “changed the face of North American advertising.” In 2009, she was interviewed twice on NBC’s Today Show.

A sought-after speaker, Sally leads keynotes for companies such as Starbucks and Microsoft, as well as innovation sessions around the world. She spent 2006 touring the country as a motivational speaker for CareerBuilder.com.

In her second year of advertising, Sally won more awards than any other copywriter in the U.S., and was described as “the most successful junior copywriter of all time.” After working at Wieden + Kennedy and Fallon McElligott, by age 27 she’d opened her first ad agency, with clients such as Target and Remy Martin. Three years later, she opened the West Coast office of Crispin Porter + Bogusky as Creative Director/Managing Director. She was the first-ever host of the national Adweek conference, and part of the team winning the $100,000 Grand Kelly prize for MINI Cooper. Her work has collected hundreds of honors, and been invited into showcases ranging from “Best Ads on TV” to The Smithsonian Museum of American History.

Sally has been named a “Cool Friend” by international bestseller Tom Peters. For her podcast, Sally has personally interviewed thought leaders such as Seth Godin, Dan Heath (author of Made to Stick), James Gilmore (author of The Experience Economy), and Scott Donaton (Managing Editor, Advertising Age global).

In 2005 Penguin published Sally’s first book, RADICAL CAREERING: 100 Truths to Jumpstart Your Job, Your Career, and Your Life, about building a fascinating personal brand.

In February 2010, HarperCollins will publish FASCINATE: Your 7 Triggers of Persuasion and Captivation. The book represents three years of Sally’s research team, and explores the 7 universal triggers of fascination: power, lust, mystique, prestige, alarm, vice, and trust.

The year Sally turned seven, her sister became the world’s top-ranked swimmer in her event (and went on to win three gold medals and a silver in the Olympics), and her brother was accepted into Harvard. Instead of spending her entire childhood on a psychiatrist’s couch, she was voted “Funniest” by classmates every year in high school. In 1991, after living in a dung hut with an African tribe, she graduated from Duke University.

When not writing and speaking, Sally campaigns to bring back the “hogshead” as a unit of popular measurement in the U.S.