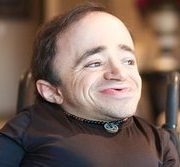 Expected to die at birth, Sean Stephenson has faced an army of reasons to give up and countless opportunities to embrace pity. He suffered more than 200 bone fractures by age eighteen, reached a height of only three feet, and is permanently confined to a wheelchair. Despite his challenges, he took a stand for a quality of life that has inspired millions of people around the world, including Tony Robbins, Richard Branson, President Clinton, and his Holiness the 14th Dalai Lama.

Sean has had more life adventures than most people who are twice his age. He
worked on Capitol Hill for a U.S. Congressman and in the White House alongside
President Clinton. He has also testified in front of the United States Senate on two separate occasions, traveled the world as a professional speaker in 11 countries and 47 states, is a board-certified psychotherapist, and has just released a new book called, “Get off Your ‘BUT’: How to end self-sabotage and stand up for yourself.”