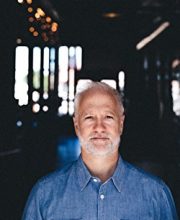 In 2005, Shawn Askinosie left a successful career as a criminal defense lawyer to start a bean to bar chocolate factory and never looked back.

Askinosie Chocolate is a small batch, award winning chocolate factory located in Springfield, Missouri, sourcing 100% of their beans directly from farmers. They profit share with the farmers, giving them a “Stake In the Outcome.”

Recently named by Forbes “One of the 25 Best Small Companies in America”, Askinosie Chocolate has also been featured in The New York Times, The Wall Street Journal, on Bloomberg, MSNBCand numerous other national and international media outlets.

The Askinosie Chocolate mission is to serve their farmers, their neighborhood, their customers and each other, sharing the Askinosie Chocolate experience by leaving the world a better place than they found it. The company is currently sustainably feeding over 1,000 students per day in Tanzania and the Philippines, without any donations. Founded at the forefront of the American craft chocolate revolution and regarded by many as a vanguard in the industry, Askinosie Chocolate sets the standard.

Shawn was named by O, The Oprah Magazine “One of 15 Guys Who Are Saving the World.” Shawn has been awarded honorary doctorates from University of Missouri-Columbia and Missouri State University. Seth Godin, entrepreneur and author, recently praised the company’s model:

“[Shawn] has built a practice of creating a worthwhile luxury good that directly benefits people. Not sort of. Not a little. But directly.”

Askinosie Chocolate has received numerous awards for their chocolate. The small team at Askinosie works directly with all of their retailers and sells their chocolate into specialty food stores, luxury boutiques, and high-end grocery chains throughout the US in nearly all fifty states and across the globe.
He is a Family Brother at Assumption Abbey, a Trappist monastery near Ava, Missouri and the co-founder of Lost & Found, a grief center serving children and families in Southwest Missouri.