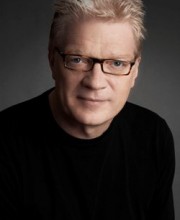 Sir Ken Robinson, PhD is an internationally recognized leader in the development of creativity, innovation and human resources. He works with governments in Europe, Asia and the USA, with international agencies, Fortune 500 companies, and some of the world’s leading cultural organizations. In 1998, he led a national commission on creativity, education and the economy for the UK Government. ‘All Our Futures: Creativity, Culture and Education’ (The Robinson Report) was published to wide acclaim in 1999.
He was the central figure in developing a strategy for creativity in education and economic development as part of the Peace Process in Northern Ireland, working with the ministers for education enterprise and culture. He was one of four international advisors to the Singapore Government for its strategy to become the creative hub of South East Asia.
For twelve years, he was Professor of Education at the University of Warwick in the UK and is now Professor Emeritus. He has received honorary degrees from the Open University and the Central School of Speech and Drama; Birmingham City University, Rhode Island School of Design, Ringling College of Art and Design and the Liverpool Institute for Performing Arts. He was been honored with the Athena Award of the Rhode Island School of Design for services to the arts and education; the Peabody Medal for contributions to the arts and culture in the United States, and the Benjamin Franklin Medal of the Royal Society of Arts for outstanding contributions to cultural relations between the United Kingdom and the United States.
In 2005 he was named as one of Time/Fortune/CNN’s Principal Voices. In 2003, he received a knighthood from Queen Elizabeth II for his services to the arts. He speaks to audiences throughout the world on the creative challenges facing business and education in the new global economies.
His new book, a New York Times Best Seller, ‘The Element: How Finding Your Passion Changes Everything’ (Penguin/Viking 2009) has been translated into eighteen languages.