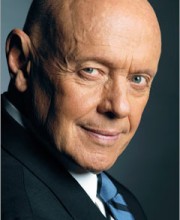 Recognized as one of Time magazine’s 25 most influential Americans, Stephen R. Covey has dedicated his life to demonstrating how every person can truly control their destiny with profound, yet straightforward guidance. As an internationally respected leadership authority, family expert, teacher, organizational consultant, and author, his advice has given insight to millions.